There are two Brasses in the Church with dates in this century.  One reads: Searlis Hawker and Wife Joan 1614.  The other reads: Thomas Flirston 1632. (see also 16th Cty and 18th Cty. For more brasses.

One of the best recorded features of the 17th Century is the Hearth Tax of 1662 which records Shallock (Challock) and Persted (Pested). The details are listed in the Kent County Archives and are shown below.

This report gives a clear record of the number of households in the village in 1662, although not the total number of people. Also an idea of social status. Only John Giles lays claim to be a “gent” (Gentleman)  It is likely that his house is what we know as Nine Chimneys as he was taxed for ten hearths. The present Nine Chimneys still has nine original Tudor chimneys and stands on the site of the of the ancient Laurenden (Loringden??) Forstal. This house is reputed to be the birthplace of William Caxton.

The owners of larger properties, those with 4 or more hearths, Hawker, Oxonden, Giles, Bing and Wanstall feature often as officials and their signatures appear on parish records in the 18th Century.

The tax levied was two shillings per hearth.

There are also a number of other records which give indications of life in the 17th Century. Baptisms tended to exceed deaths with the exception of 1624 – 1630 when there was a resurgance of the Black Death and also 1638 – 1639 due to an unspecified infection. In 1618 William Oure, yeoman, willed the rent from a 2 acre field in Pested to to the poor of the parish a bequest which continues today.

The Compton census of 1676 was completed by the Rev Richard Mun – Vicar – for His Grace the Lord of Canterbury and he reported an estimated number of persons in the parish of Godmersham and Chappell of Challock as 340. Using a reasonable ratio of Godmersham to Challock of 2 to 1, we can estimate Challock as 114 adults. (The return was for people over the age of 16) 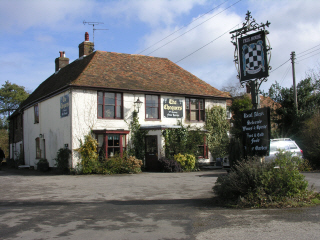 In 1629 the Chequers was built using ships timbers from Faversham.  In 1635 The sale of ale was started by a farmer Zachary Carpenter and it became a registered inn in 1700. Over time a part of the property has also been used for the sale  Saddlery, Drapers, Grocers and the village Post Office.